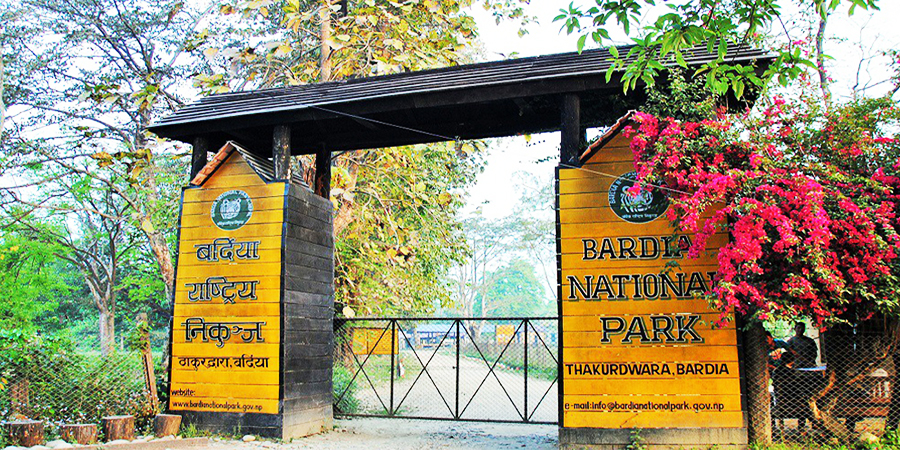 Spotting a Bengal tiger in Nepal is the highest in Bardiya National Park. Bardiya National Park occupies 968 sq km in the mid-far western Terai region. It is the largest and most undisturbed and protected expanse of wilderness in southern low land of Nepal. And it is the least visited by the tourists.  Bordered by the Karnali River, in the southeast by the Bardiya River, and on the north by the Churia Hills, it is composed of eight different types of ecosystems. 70% of the park is occupied by the evergreen sal forest.  The remaining 30% is a combination of Savannah and riverine forest. The Park Headquarters is situated in Thakurdwara where nearby are the villages and fields inhabited by an aboriginal tribe, the ‘Tharu’.

Formerly famous as a hunting reserve, Bardiya National Park became a conservation area in 1976 and then achieved the status of National Park in 1988. Now it is an ideal environment for the study of wildlife. The WWF and the Nature Conservation Trust are on the go in the park observing wildlife and breeding habitats. They have also implemented an educational scheme for local people highlighting the importance of conservation. The park possesses more than 250 species of birds, including the endangered Bengal florican, Sarus Crane, and many species of parakeet, geese, and duck. The Geruwa River which rushes down from the Churia Range is the home of the famous Masher game fish, the freshwater Gangetic dolphins, and the Gharial and Marsh Magar crocodiles. Also to be seen are such inhabitants as leopards, wild cats, rhinoceros, swamp deer, blue cows and bulls, sloth bear, languors, barking deer, jackals, cobras, kraits and pythons. Wild elephants are not in great number in the park but some of the males are considered to be the largest in Asia. Himalayan Vacation Treks and Expedition’s tour arrangements to the Park will make a memorable experience for the nature enthusiast.  Included in our package is a Tiger spotting tour atop an elephant, guided by a wildlife tracker. The chances of spotting a Bengal Tiger are over 90%. Himalayan Vacation Treks and Expedition is capable, experienced, and prepared to give a 24-hour emergency response to an accident or condition that requires attention or evacuation.