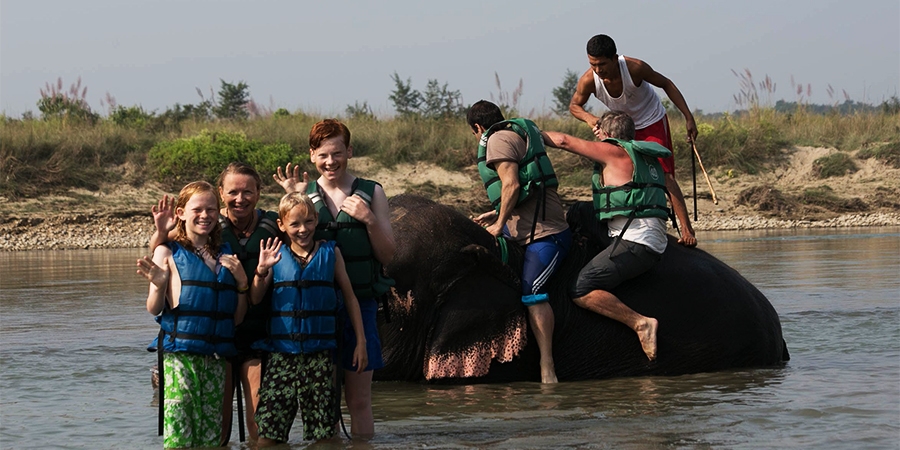 Nepal, as a country best known for its panoramic sky kissing mountains, the lowland Terai in the form of national parks and wildlife reserves, which remains as some of the finest wildlife and bird paradise not only on the subcontinent but also popular in the world.  Chitwan national park is one of the main attractions in Nepal since it has been one of the country treasures of natural wonders for long. Therefore your visit to Nepal will not be accomplished without a visit to Chitwan. The name Chitwan means “Heart of The Jungle”, because of its dense forests and wild animals. Chitwan is not just the name of a national park but also of the Surrounding Doon Valley also known as Inner Terai and administrative district. Chitwan not just the wildlife but also famous for a pilgrimage to Devghat at the confluence of Kali, Seti and Trishuli River where since ancient age hermitage have been coming to meditate. Many Hindu people think that Devghat is a great and holy place to end life.
The park is located in south-central Nepal, covering 932 sq. km. Chitwan valley consists of tropical and subtropical forests such as Sal forests, Riverine forests, and Grassland. Sal forests cover 70 percent of the park. Sal leaves are used locally for plates in festivals and religious offerings. The area was known as “Charkoshe Jhaddi” the Four Mile Forest and a hunting reserve for big game hunting until 1951. In 1963, the area south of the Rapti River was isolated as rhinoceros sanctuary. The area was gazetted as the country’s first national park in 1973. Identifying its unique ecosystem of international significance, UNESCO declared Chitwan national park a world heritage site in 1984.
The park is home for more than 50 mammals’ species, over 500 birds and 55 amphibians and reptiles. The endangered animals found in the park are One Horned Rhinoceros, Gaur, Royal Bengal Tiger; the world’s one of the most endangered species, Wild Elephant, Four-horned Antelope, Pangolin, Golden Monitor lizard, Python etc. Birds include Bengal Florican, Giant Hornbill, Black Stork, White Stork etc. Hence, this National Park is regarded as the best National Park of Nepal. Elephant Breeding Center, sunset at the Rapti River and the Crocodile Farm are Must See locations in the park.
other major animal you will see is the one-horned rhinos whose favorite place to live on earth is none other than Nepal. The park is also famous for bird watching, and boat tours. Chitwan is also a place to learn about ethnic Nepali people called Tharu. The traditional Tharu dances and songs are performed in the evening and we will visit one of these interesting local cultural events. However, most of the typical Tharu huts have been converted to modernized buildings these days. But we still can make our luck to watch some of the
Himalayan Vacation Treks and Expedition will organize a trip to Chitwan during the months of September to March since it will be very hot in the other months of the year. Himalayan Vacation Treks and Expedition is capable, experienced, and prepared to give a 24-hour emergency response to an accident or condition that requires attention or evacuation.